It’s tautological to say I’m resigned to being a fatalist but disappointments take their toll and I tend to set my expectations low. I learned late that the second volume of The Films of Andy Warhol Catalogue Raisonné was nearing publication and while Callie Angell had been gracious in crediting me in her publications for providing the clue necessary to sequence the reels of Empire, I was anxious about whether I’d make it into what would become the definitive source of truth.

The Whitney threw a publication party on 2 December 2021 with John G. Hanhardt, Bruce Jenkins, and Tom Kalin. I attended virtually and started keeping an eye out for physical copies when I happened to be in or near art-heavy bookstores. I didn’t find it at SFMOMA – not surprising given that they’d gutted their film program in 2021 – but I even failed to locate a copy during my European travels; it wasn’t on the shelves of the Cinemateca Portuguesa in Lisbon, or SALT Galata in Istanbul, or a number of other museum bookstores or libraries. 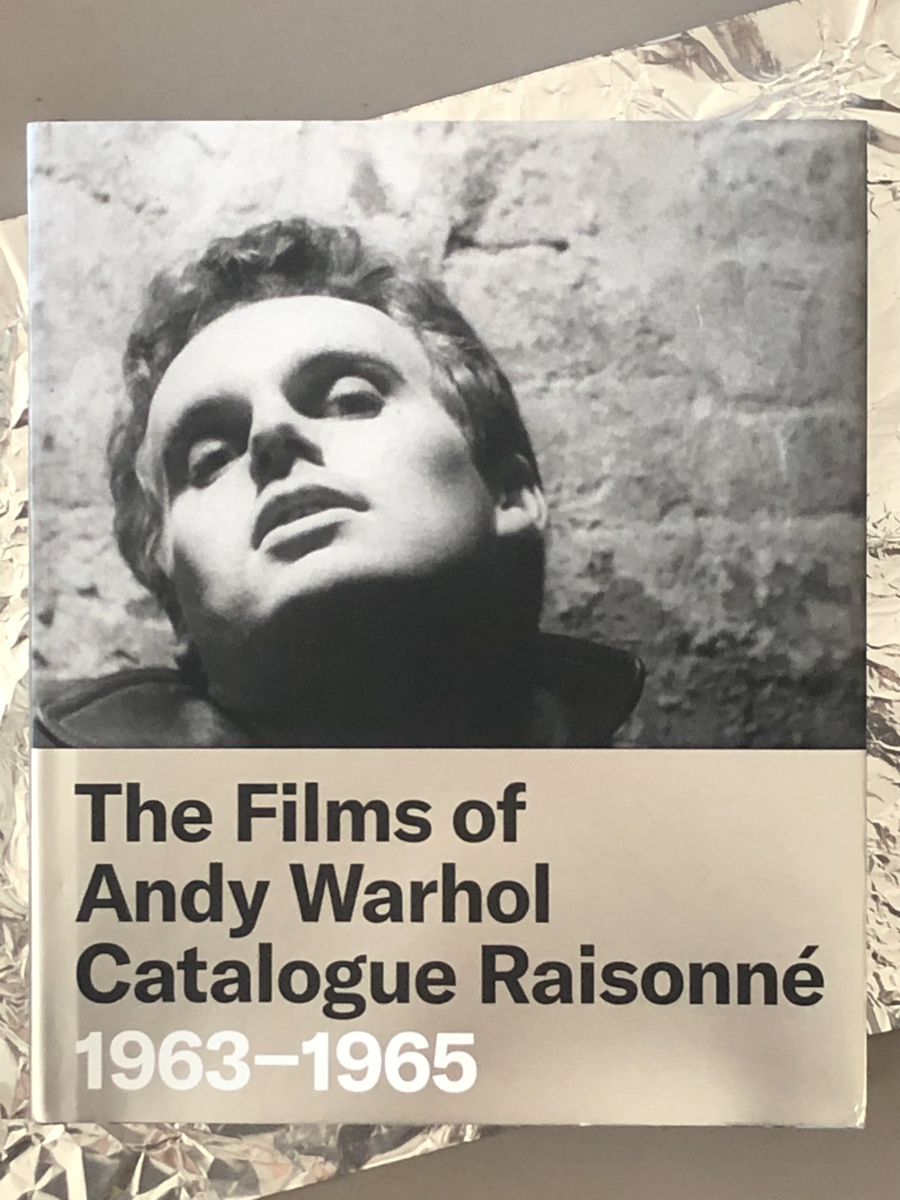 I took a ten day detour on my way home from Europe to perform in Cambridge, Brooklyn, and Washington, DC. While I was in New York I visited the Whitney Biennial, making sure to allow ten minutes in the bookstore before the Museum closed. It wasn’t hard to spot the book as it was prominently displayed. I found my name in the index, prompting both a wash of excitement and a grimace; my last name was misspelled as it had been in an earlier Whitney publication. I quickly turned to page 218: scanned the page, then again, a more detailed scan, my countenance changing until a timid voice in my head said “‘s’cuse me but the index did say page two seventeen”. 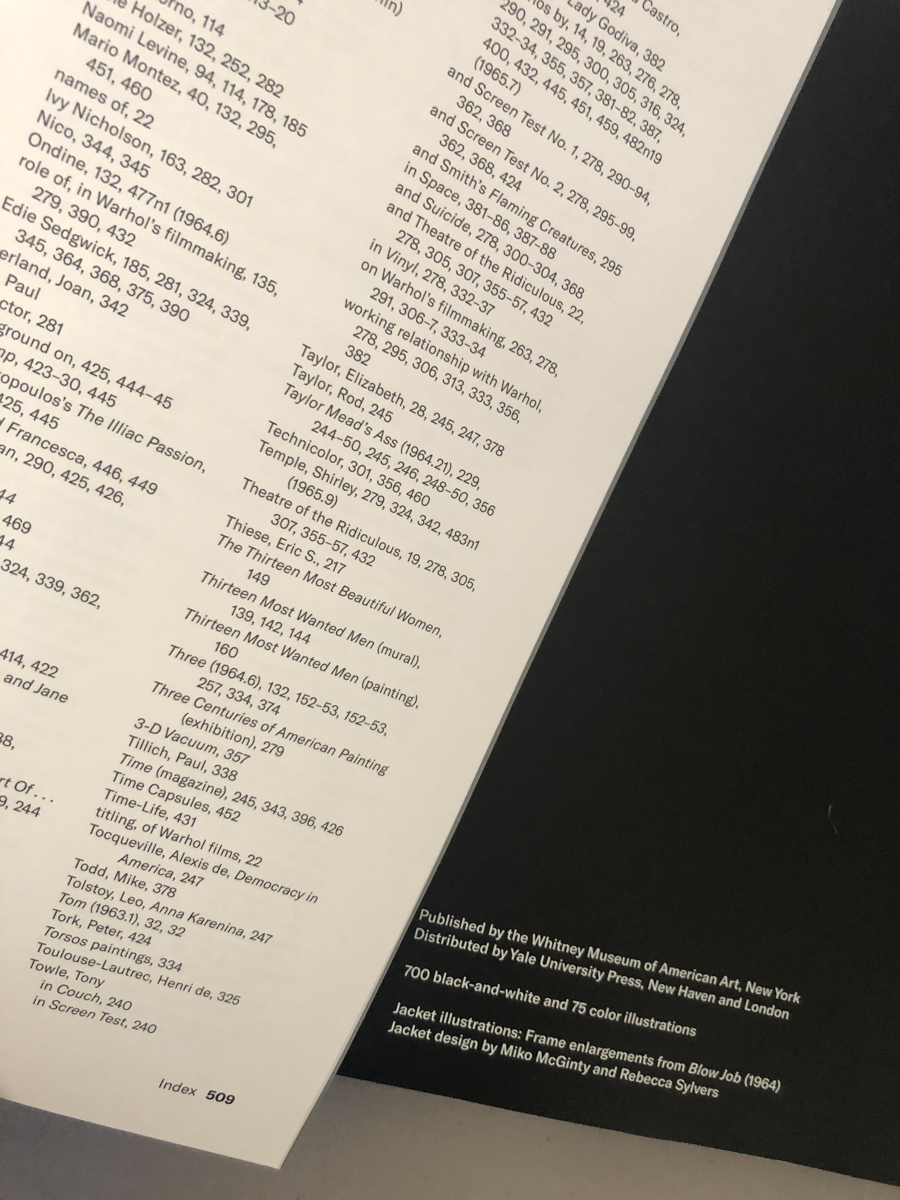 And there I was, leading off the paragraph about my “discovery”. 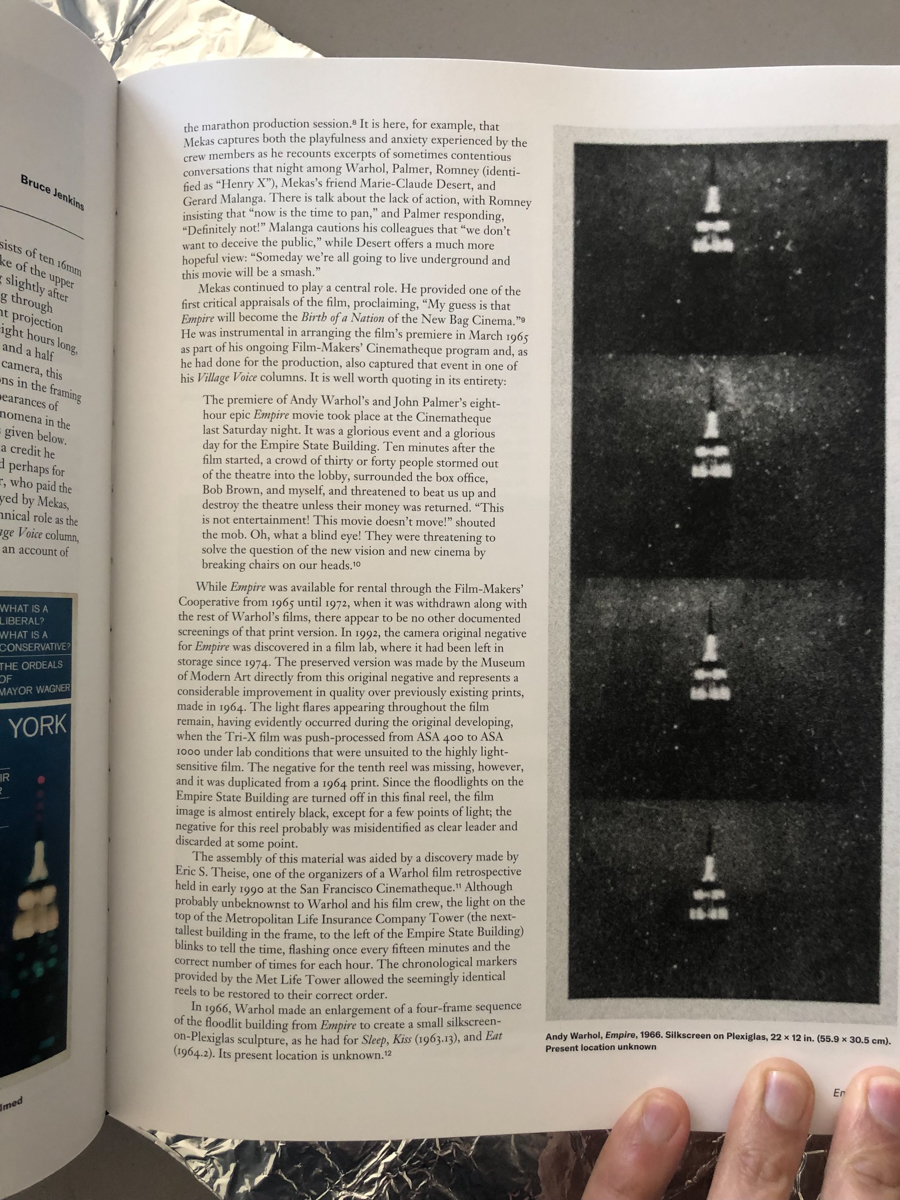 I’ve been proud of some artworks I’ve made over the years, proud of some technological projects: writing code and writing words for a general audience in order to popularize. I was especially proud of the confusion matrix research I did after my dissertation work which led to a publication in the flagship journal Human Factors (I remain astonished that the referees for that paper asked me to make it longer). (Although I published three chapters from my dissertation, its defense was more of a relief than a source of pride.)

Being in the right place at the right time (thanks Steve Anker, thanks Kurt Easterwood), knowing a bit about Manhattan architectural landmarks, giving a close viewing to a film not seen in decades and thus helping pave the way for its reassembly … this acknowledgment in the catalogue raisonné is a huge source of pride. There’s not a Warhol film I’d rather be associated with than Empire. Thank you Claire K. Henry, John G. Hanhardt, and any others unknown to me who kept my name referenced to this aspect of the film. 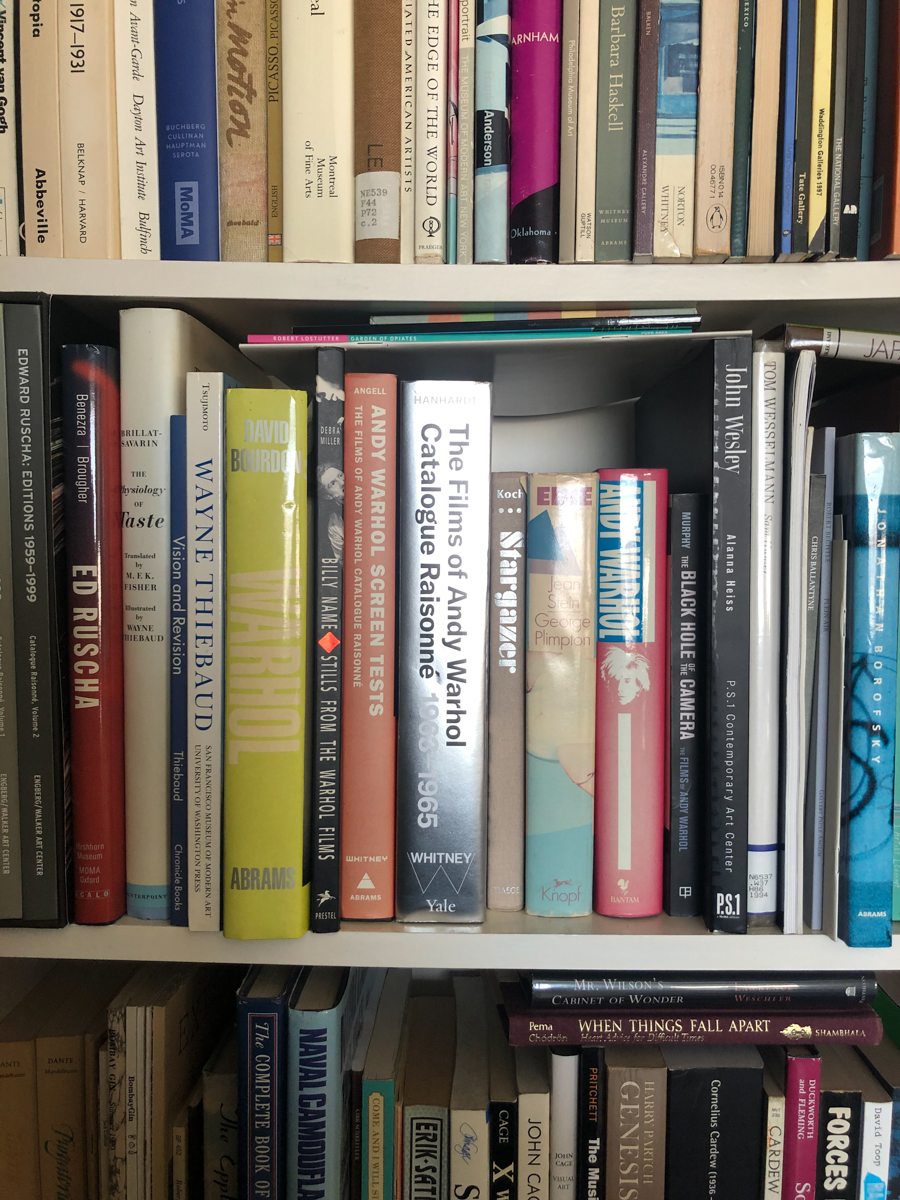 And thanks to Kate MacKay for buying me a copy for my May birthday, keeping a poker face as I messaged excitedly about my bookstore discovery in June. I took possession and shelved it in its rightful place in July.

Touring a friend around San Francisco yesterday I saw copies under glass, under plastic, at City Lights and SFMOMA. (In the market for your own? Please buy from City Lights or a bookshop.org seller. I am an affiliate and get a commission if you purchase through that link. Again, given that SFMOMA gutted their film program in 2021, buying a film title through them seems incongruous.

Kurt Easterwood and I agreed in May 2021 that if I could coax the text out of an obsolete word processing program we should release the 1990 booklet we co-wrote in 1990. My preface to the PDF reissue follows but the entire booklet is available for download from the essential site, Monoskop.

Preface to the PDF Edition

My most unsettling memory of working on this monograph relates to an afternoon spent threading through microfilm at the old Main Library, now the site of the Asian Art Museum. There were screening dates to confirm and Village Voice articles to transcribe. My essay on Empire required consultation with architectural guidebooks and a Manhattan street map; on the spur of the moment it occurred to me to search the New York Times for the night of filming's weather forecast. I'd arrived after an early lunch, anticipating at most two hours of research but if any patrons remained in the building later than I they were not behaving civilly.

After being ejected from the Library I wandered west along Grove Street, my eyes taking in San Francisco's Civic Auditorium and City Hall. But the rest of my body and mind were having none of that, traveling instead southbound through SoHo toward Tribeca and the Twin Towers. My five hour immersion in the popular press of 1960s New York City had transported me to a not-especially Warholvian Manhattan circa late-1980s. What little memory of my dreams remains upon waking dissipates quickly but that day I could not shake the sensation of walking through a city 2600 miles distant.

My greatest source of pride related to this monograph began with Steve Anker telling me that Callie Angell, adjunct curator of the Andy Warhol Film Project at the Whitney Museum of American Art, had told him that my essay on Empire facilitated their sequencing of the reels, a task up until then considered daunting for the reels where the Building is consistently illuminated from start to end. She was gracious about crediting me in the Whitney's The Films of Andy Warhol: Part II booklet and later in her Acknowledgement to Andy Warhol Screen Tests (regrettably the vowels in my last name were transposed to “Thiese”). When I traveled to New York for premieres of the second release of restorations in 1994, she was exceedingly generous with her time and curatorial elan, taking me behind the scenes at the Whitney and introducing me to scholars, critics, Superstars, and senior staff of the still-in-the-works Warhol Museum in Pittsburgh. We'd been in touch a few times since that visit but the news of her suicide took a long time to reach me. With Kurt's agreement we are releasing this PDF on May 5th, 2021, the eleventh anniversary of her passing.

It's worth noting that Kurt and I were on a tight deadline and were not able to preview all of the films we discuss here. Throughout these pages we're guilty of having injected fresh energy into old myths, misrepresentations, and outright falsehoods. My biggest regret related to this publication is relying too much on the literature, old issues of Film Culture and the like, and not telephoning or writing letters to key players who were very much alive at the time of the writing.

Pieces of the Warhol puzzle occasionally still drop into place for me. I must have been suffering from Warhol fatigue in the months immediately after our monograph was published because it was more than a decade before Lou Reed and John Cale’s Songs for Drella (1990) entered my consciousness via a friend's mix CD. It remains a favorite, partly because it, too, perpetuates untruths, and partly because I feel seen in the lyrics of Work:

Andy said a lot of things, I stored them all away in my head
Sometimes when I can't decide what I should do I think what would Andy have said
He'd probably say you think too much
That's 'cause there's work that you don't want to do It's work, the most important thing is work

I’m grateful that I had the opportunity to see the late John Giorno give a flawless reading/performance from memory at the First Unitarian Universalist Church in 2009. And I still make an effort to see “new” Warhol films. I caught the Pacific Film Archive's screening of Poor Little Rich Girl (1965) and a selection of Screen Tests in 2018. I was fortunate to be in town for a geography conference when Chicago Filmmakers screened Tiger Morse (1967) and Jill Johnston Dancing (1964) in 2015. In 2012 I was able to schedule an appointment at the Warhol Museum and spent several days viewing VHS dupes, finally seeing Couch, having a rip-roaring time viewing Ondine, Ingrid Superstar, and others in Since (1966), and being absolutely transfixed as Jack Smith commandeered the closing minutes of Camp.

I'd like to see Eat and Chelsea Girls again, and I remain deeply envious of anyone who's seen Drunk.