Fake has joined the unfortunate set of words whose definitions have become muddled beyond recognition. See literally, like, and really. Literally’s used in contexts where it means its opposite. Like became a rhythmic device, a percussive pause to postpone, briefly, revelation of the speaker’s lack of focus; a punctuation mark requiring four characters, not one.

Once meaning “not genuine; counterfeit” fake has come to stand for anything its utterer disagrees with, often in complete disregard for – admittedly, this is problematic, too – objective reality. I appreciated the single syllable punch and plainspeak of fake, and I appreciate its derivative in the sense its used in authoring software: fakers.

Software engineers embrace fakers because they’re utilitarian and because they can provide an outlet for cleverness. They can spew an endless quantity of credible data that can be put to use in prototyping and automated test suites. Simple example: when you’re developing a web interface for managing a database full of users, being able to effortlessly generate dozens of plausable names, having plausable physical and email addresses, phone numbers, and other attributes, gets you past the cognitive barrier of seeing the name of a developer that’s no longer with the company repeated over and over at 123 Main St, Anytown, USA. Using “not genuine; counterfeit” data sidesteps privacy violations that come with using real data. When demoing prototypes to designers, product managers, and other stakeholders, the data does not stand out as artificial and the prototype is perceived as absolutely real, even fully operational. With dozens upon dozens of fake users, sorting, pagination, and other issues of usability come to the fore and are less likely to be slapped on later as panicked afterthoughts.

I first encountered a Ruby implementation of fakers, which admits to being a port of a Perl implementation. I presume every programming language has multiple faker libraries to choose from, but, for the languages I work with everyday there are Python and JavaScript implementations. Returning to my claim that fakers allow for creativity and cleverness, well, just look at the Faker::Lovecraft documentation. Eldritch!

In early 2018 I worked on a project where user-contributed data was to be collected, geolocated, and plotted on a map over a span of days, weeks, maybe months. The issues I wanted to address sooner than later were related to shifts in map representation as data accumulated from 10 users to 100, to 1,000, perhaps to 100,000 or more; what worked for 500 users was not likely to be interpretable or performant for 50,000 users.

Since the target audience is United States residents, I needed a faker for geographic data that mirrored US population patterns. I didn’t find one, so I wrote one. The algorithm is simple, there’s a hosted implementation that you can try out – at least in the near term – and the code and data have been released on GitHub with instructions so that you can set up your own local installation. Which I encourage you to do.

Tell you about the name later.

The United States Census Bureau makes shapefiles available for its Census Tracts. Sparkgeo’s Will Cadell wrote such a concise how-to on Building a US Census Tracts PostGIS Database that I simply had what he was having, except with updated data; as I type this, that means 2018. And I named my database census_tract_2018 instead of censustract2012.

The Census Bureau also provides a Gazetteer file for Census Tracts containing population and other data from the 2010 Census that can be imported and joined against the previously imported shapefile data. As this is a faker I’m not deeply concerned about the datasets coming from different years. Perhaps I or you will work to sync things up after the 2020 Census results become available.

I examined the Gazeteer file, then created a table for its data:

After deleting the first (data header) row – it’s a textfile, not a csv file – I imported it using PostgreSQL’s COPY command.

The first step of the sampling algorithm requires that there be relative weights for each tract because a tract with a population of 1,000 people should be twice as likely to be sampled from as one with 500. I used a window function to calculate cumulative totals for each tract, in order of geoid, and used that to determine starting and ending values of the sampling interval. I stored that interval in a PostgreSQL range type field called weight. That provides the mechanism to randomly select a Census tract in a way that mirrors the geographic distribution of the United States population.

A query using the window function looks like this:

Only a subset of this data is needed for the app, so I’ll INSERT INTO a fresh table the full output of this query.

Queries against a PostgreSQL range type by default include the lower value and exclude the upper value – the mathematic notation would be [ ) – so I don’t even have to fuss with the fact that the end value of one row is identical to the start value of the next row. Clean.

I’m getting a little bit ahead of myself here but casual timings – using the stopwatch on my phone – of the Flask application running locally on the Soulfood Beverage example demonstrate the performance gain using the index. Dramatic.

The second step of the sampling algorithm is to pick a random point within the geometric boundaries of that Census tract. The easiest way to do this is to simply generate a point within the extent, or bounding box, of the Census tract and check that it in fact is contained by the actual boundaries. If it is, use it; if it isn’t, generate another point. This is straightforward to do using a programming language but it feels cleaner to use a stored procedure in the database itself. A pair’s been made available at OSGeo’s PostGIS wiki and the simpler of the two works fine for this data. (Richard Law’s noted that the function ST_GeneratePoints, introduced with PostGIS 2.3.0, sidesteps the need for a stored procedure. Apparently I’m way behind on my changelog reading.)

This stored procedure will throw an exception if an interior point is not found within 1000 iterations.

I needed this fake data to tune a Django application but the faker itself is so simple that I used the Flask microframework to create a little web app. Most of the code is devoted either to setup or output, so I’ll focus on the few lines that do interesting work.

max finds the largest value of the upper bound of weight in the table, which represents the total population. sample returns a random integer between 0 and max. The tract query selects a random Census, the one whose weight, our range type, contains that random integer. Finally, feature_geom runs the stored procedure to find a random point within the Census tract’s boundaries.

The while True: loop is a Pythonic emulation of do while; we always need at least one pass through the loop. If the stored procedure doesn’t return an acceptable point after 1000 iterations we catch the exception, rollback the database transaction, and resample. In practice, I’ve yet to see this fail. True, this introduces a sampling bias that would not be acceptable in a genuine statistical method, but this application is just a quick and dirty faker for eyeballing map styles.

It’s a pleasure following Adrian Miller, a.k.a. @soulfoodscholar, on Twitter. In particular, I get a kick out of voting in and discussing his occasional polls. I’m choosing one of his earliest, concerning soul food beverages, because even though I would never order it, seeing Grape Crush on the menu is a pretty strong real deal indicator. And his category that contains it? Purple Drank: perfect! Although he only got 89 votes in his poll we’re going to fake many more and populate a map.

This screenshot demonstrates how you’d generate a sample of 1000 votes that match @soulfoodscholar’s final distribution. 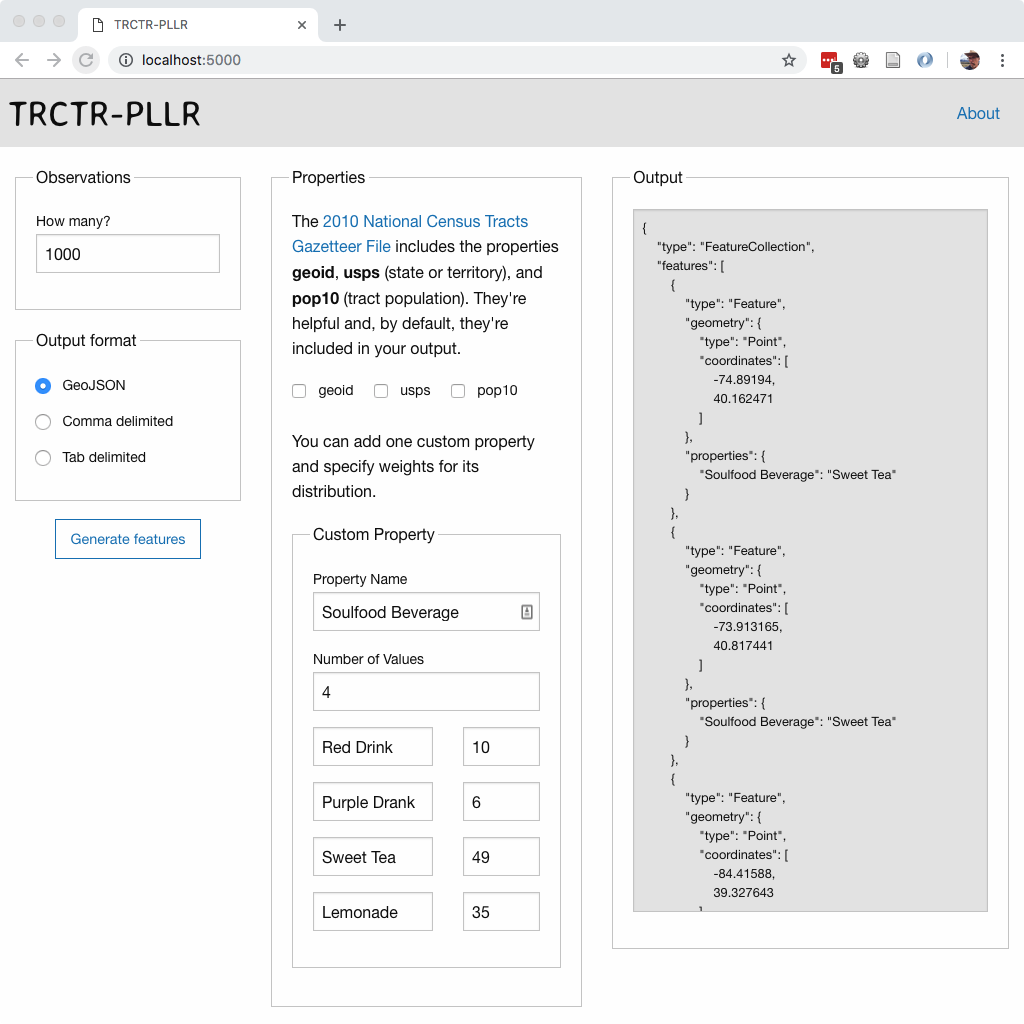 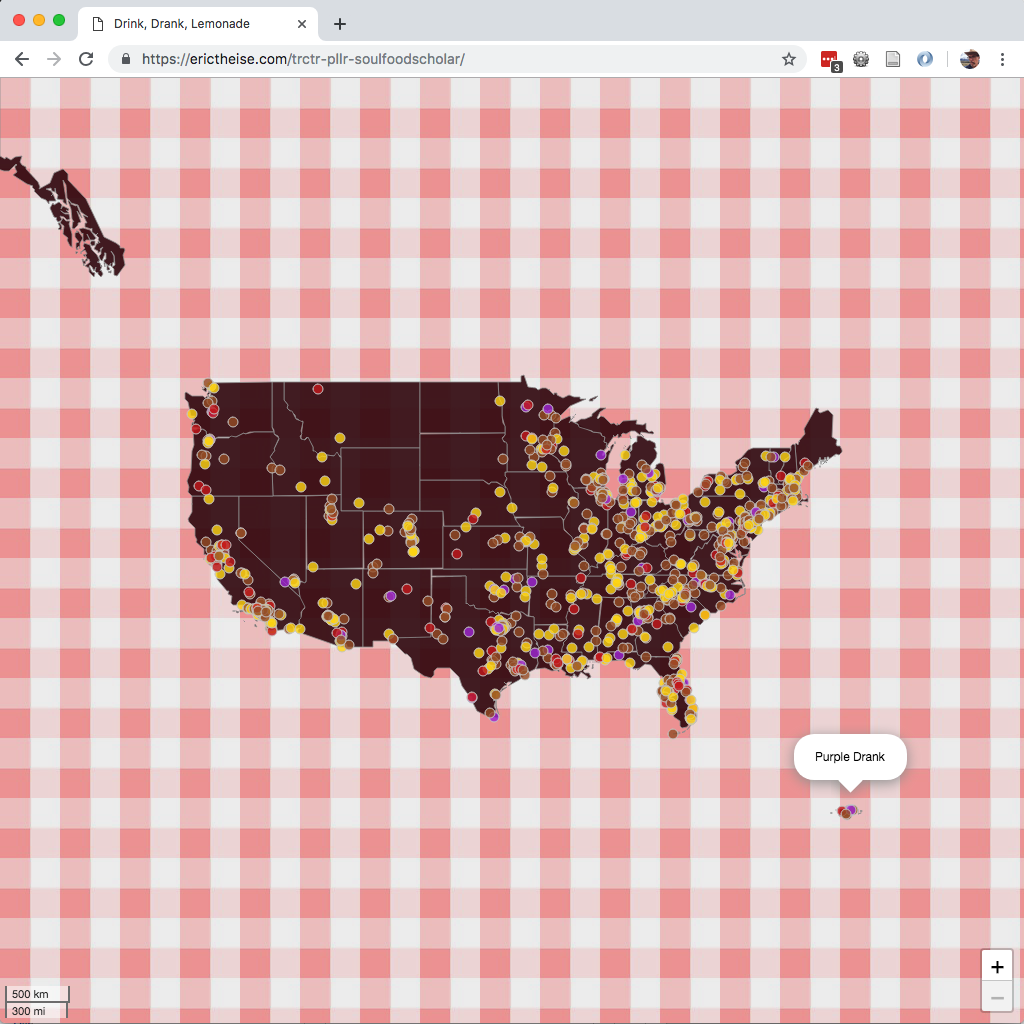 While I am partial to crushing rosemary, sage, fennel seed, and garlic with mortar and pestle this section addresses portability. This project stalled because at the time it didn’t seem I could distribute a large database dump via GitHub. It also didn’t seem reasonable to expect a casual cartographer to set up PostgreSQL with PostGIS, then massage the Census files. I recently learned that GitHub releases can incorporate large files that aren’t under source control in the repository so I’m going to cut and promote a release.

This application started with a dull-as-dishwater name that I can’t recall. As the logic came into focus it became clear that it was about pulling tracts, which tied it to the motorsport known as tractor pulling in my mind.

But what would be the proper spelling? Tracter seemed more in line with what was going on than tractor but that spelling could easily lead to confusion and well-meaning correctives. The tried and true Internet operation of vowel extraction got me to trctr, and from there I tumbled down to trctr-pllr, a construction nearly identical to that arrived at by Lifter Puller, a mid-1990s band whose sound critic Robert Christgau described as

postpunk noir at the economic margins, drugs and sex and rock and roll in that order, an epic best intoned in toto around a verboten communal ashtray in some after-hours den.

and I’d been listening to Lou Reed take down Christgau in a live recording of Walk on the Wild Side while I was coding.

Perhaps one day I will write about my admiration for LFTR-PLLR and subsequent projects of their frontman and lyricist, Craig Finn.

Books, dissertations, whole careers have been devoted to the authority and power of maps. This tool makes it simple to inject quantities of plausible location data into a map or spatial database to help you make decisions about styling, especially dynamic styling, when all you know about your underlying population is that they reside in the United States. It works at the level of the Census Tract. It knows nothing of property parcels, transportation networks, points of interest, or correlations that almost certainly exist between location and the properties you’d ultimately like to render.

Thanks to those who’ve fiddled with TRCTR-PLLR. Special thanks to Éric Lemoine for guiding me through a subtlety of GeoAlchemy2 and Richard Law for the tip on ST_GeneratePoints which I’ve yet to implement although I have created an issue for it.